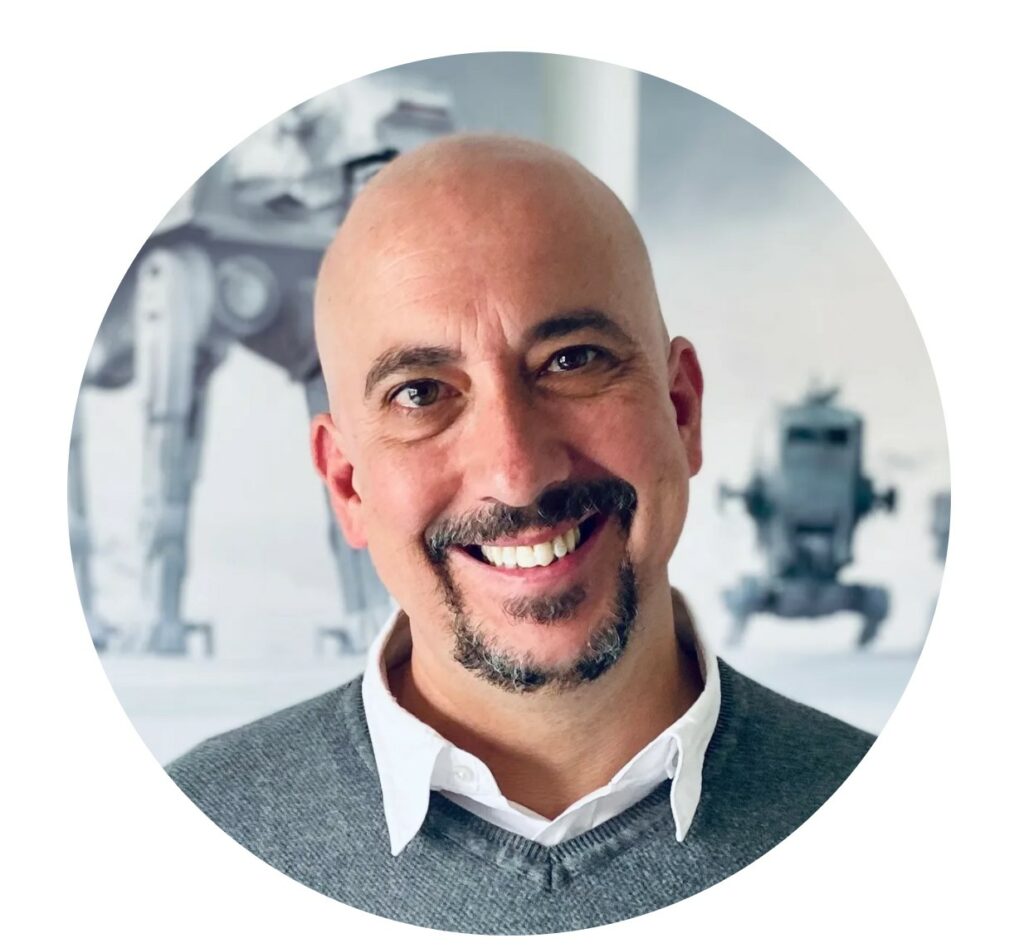 Born in Toledo in 1971, he knew that he wanted to be his own boss from a very young age. Encouraged by his uncle Fredeswindo, a “lifelong” guide, he graduated as an Expert in Tourist Business and Activities in 1994 and was certified as an Official Tourist Guide in 1995. He has worked in tourism and team coordination for more than half his life, founding the event and conference organisation company A.C.T Global Services S.L. in 1999. He was also co-founder of the audio-visual production company Hopal Producciones S.L. (“Toledo en la Historia (Toledo in History) DVD), and co-founder of the computer applications company Nexora & Global S.L. (Be Your Guide, winner of “Best Cultural App in Spain, Segittur 2014”). A tireless traveller, lover of culture, food and the quiet life, he currently runs, together with his nephew Javier Rodríguez, “Destino Toledo”, an agency that specialises in private à la carte tours and designing exclusive experiences. 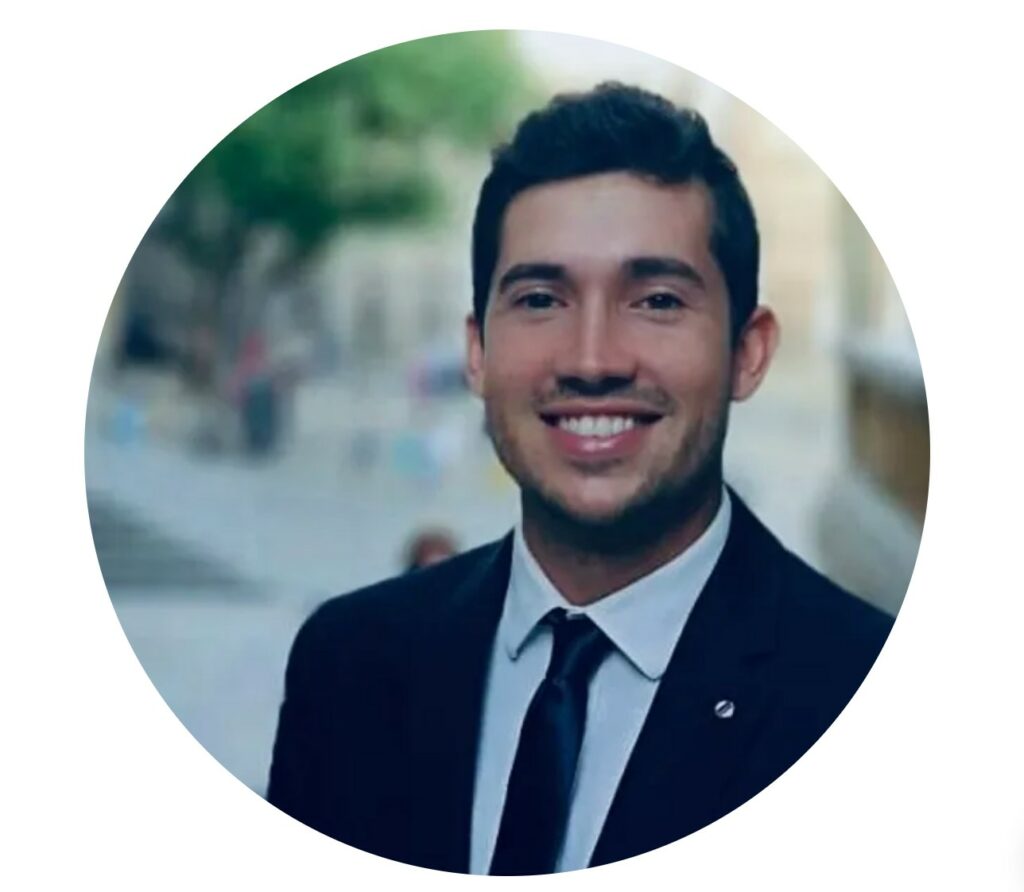 He was born in Toledo in 1984, growing up in a family that worked in tourism, where he discovered the beauty of the history, monuments and traditions of his hometown, leading him to become the third generation of guides in the family. Passionate about travel and discovering new cultures, he earned a degree in Tourism at the Autonomous University of Madrid, completing his training by studying abroad in destinations worldwide. He’s lived in Japan, Australia, Ireland, Italy, and France in recent years, although he always intended to return to his hometown of Toledo to serve as a bridge between his city and the many visitors it receives. He launched his professional career as a Tourist Guide in the Regional Association of Guides of Castilla La Mancha in 2008 and was elected its youngest president in 2013. When he is not showing the charms of the city to travellers, Javier loves to travel and create unique memories with his family. 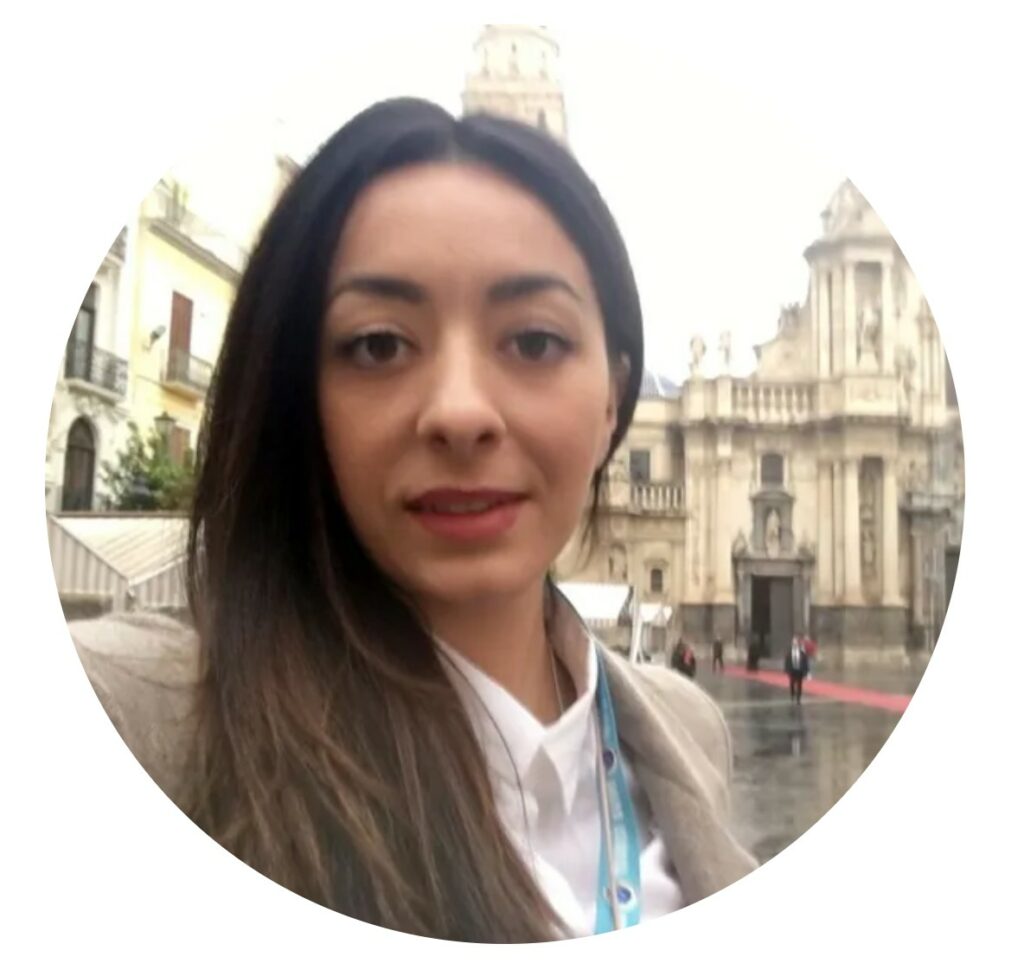 She studied tourism in Almeria, in the south of Spain, travelling to Germany on a year’s scholarship at the University of Albert Luwdignstein. She continued with a series of training courses at the universities of Cordoba and Granada after returning to Spain. Back in Toledo, she earned a degree in Humanities, taking different training and research classes in the municipal archives of Toledo. She then earned a master’s degree in Artistic and Cultural Heritage, specialising in the evolution of tourism in Toledo from the 19th century onwards. She has been a member of the Board of Directors of the Regional Association of Guides of Castilla La Mancha since 2015 and is currently its president.

She was interested in everything social and cultural from a very young age and passionately enjoys her work as a professional tourist guide, a profession that combines languages, culture, history, traditions and visitors from all over the world and serves as an opportunity to craft completely enriching experiences. 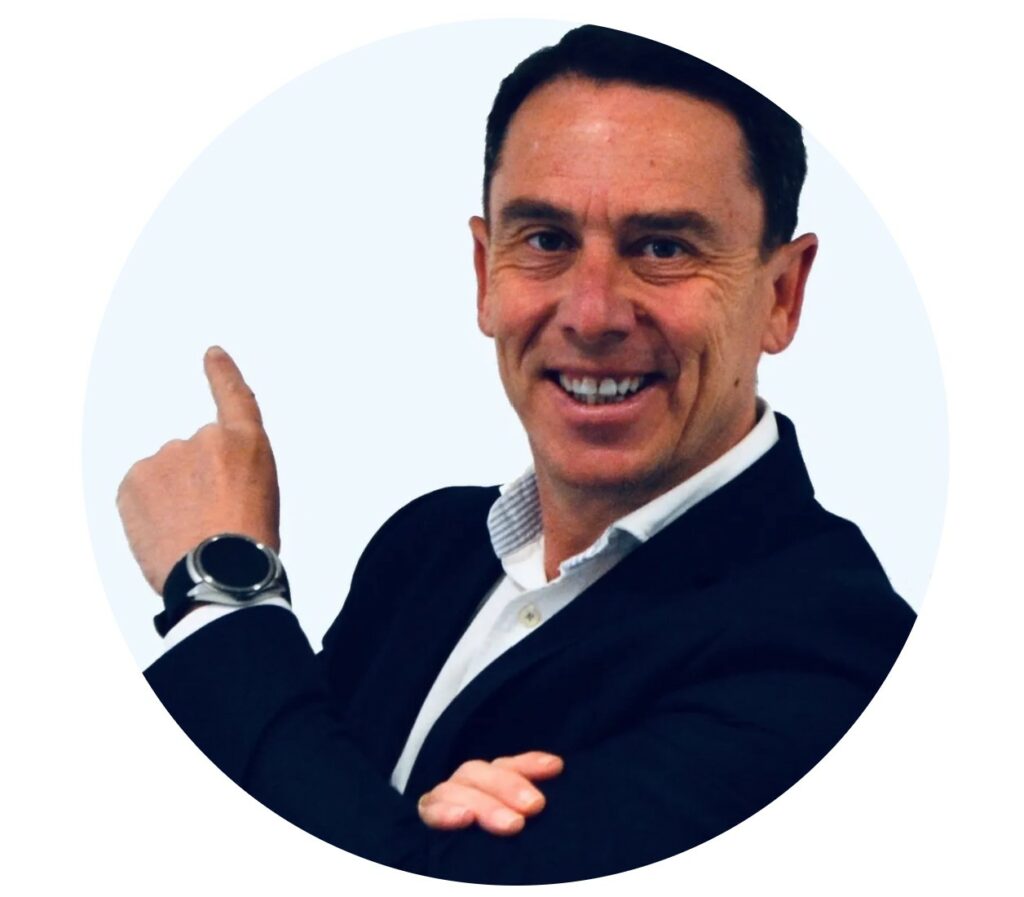 He was born and raised in Toledo, in a family with several tour guides. He studied business and after working in different positions in the private sector, he decided to follow the family tradition. He was accredited as a tour guide and began to share the wonders of the city with all kinds of audiences, from children to adults. The first thing you’ll notice about Enrique is the passion, love and deep knowledge he has of every corner of his city. He’ll be a guide you’ll remember for the rest of your life. 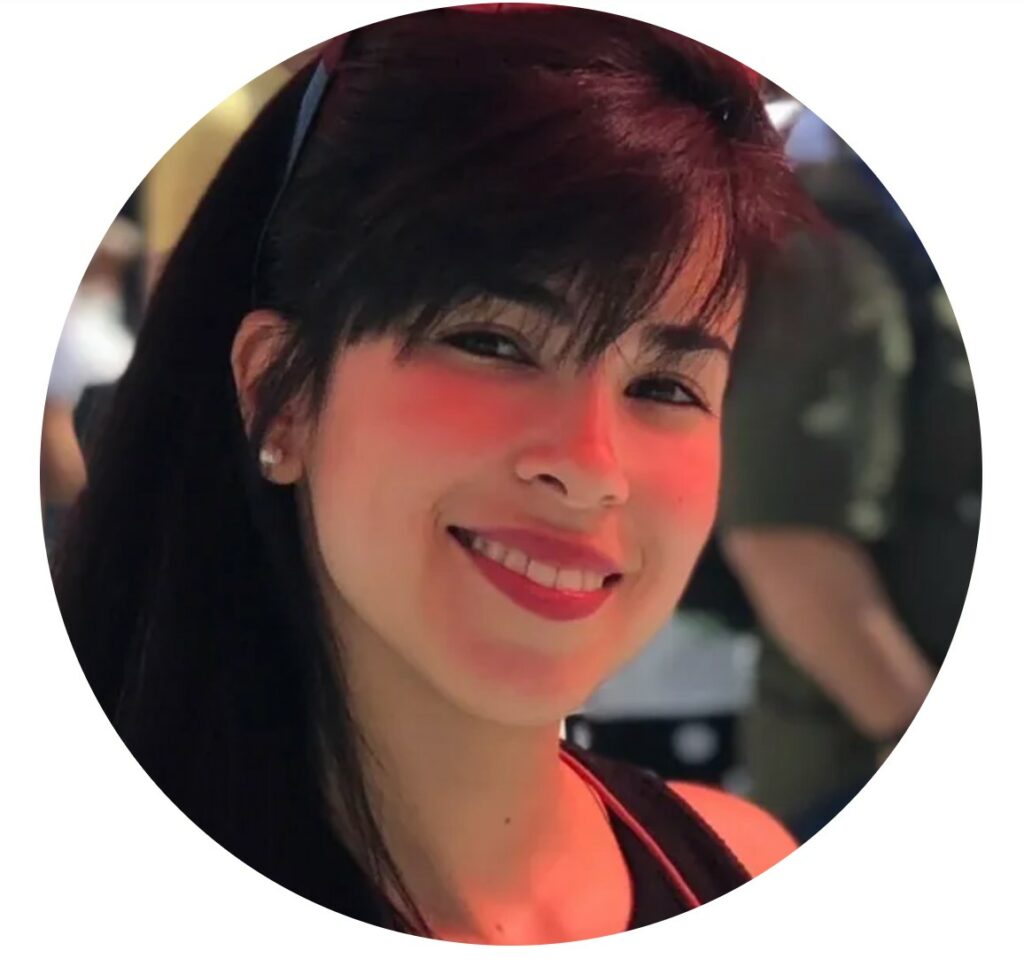 With a family whose history can be traced back to the ancient Mozarabs, she has lived in Toledo’s old town most of her life. She earned a Tourism degree in 2013 and has worked as a guide in Spanish, Portuguese and English ever since. An animal lover, she works with several animal shelters in the city, as well as with environmental and heritage protection associations. Natalia is a lover of art history, and always tries to visit as many museums and monuments as possible on her travels. “It’s important to know the past if we want to understand the present” is her motto and one of the objectives of her guided tours. Easy-going and with a constant smile on her face, she will show you Toledo’s blend of cultures and architectural styles while making you feel right at home. 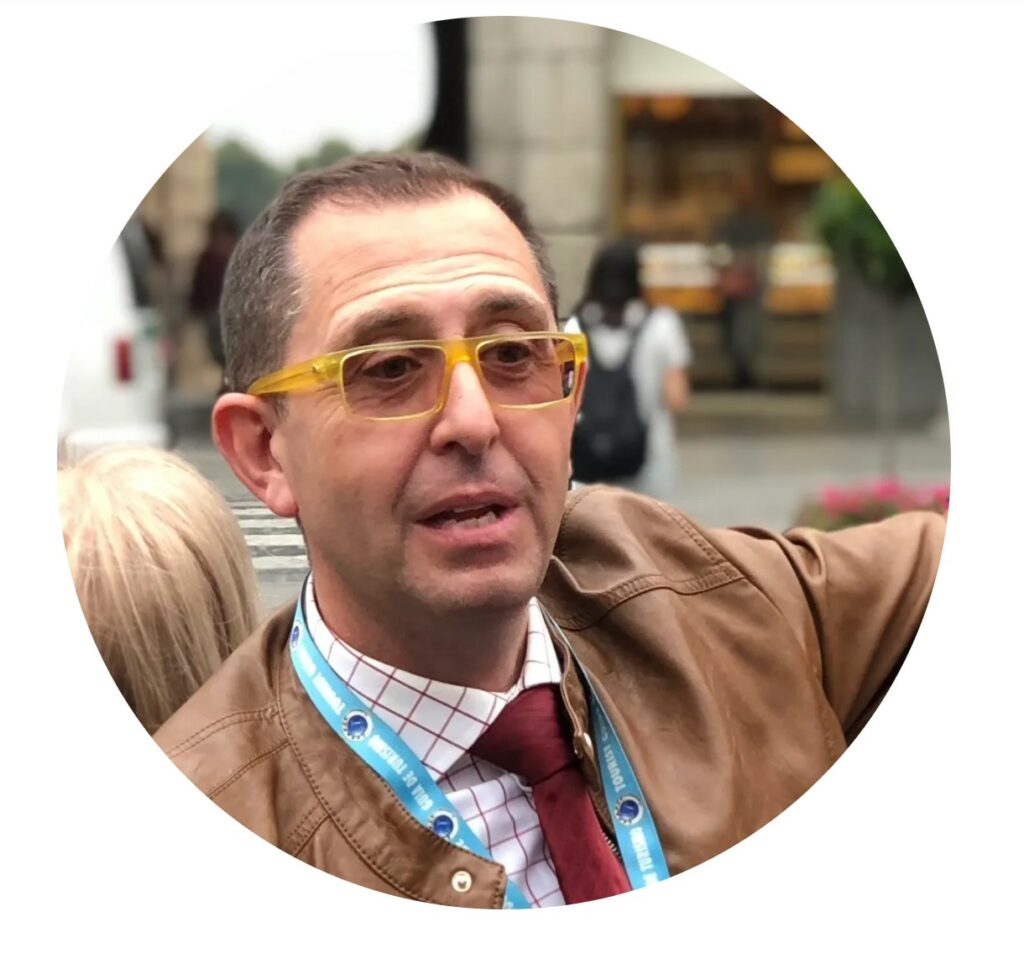 He was born in La Nava (Asturias) and grew up surrounded by nature. He went to a Dominican Friar school and his family life made it easy for him to play sports and travel extensively around Spain, creating a deep love for reading and history from an early age. This passion for history led him study Tourism, and he ended up living in Ibiza, Gran Canaria, France, London and Toledo, of course. He has lived in the city since 1991, learning more about Toledo’s cultural, artistic and religious riches every day. His passion is reading everything he can get his hands on related to this city and his family, especially his twin sons. Fernando is always ready to welcome you to the city and to immerse you in its Jewish, Muslim and Christian past, with all its art and history. 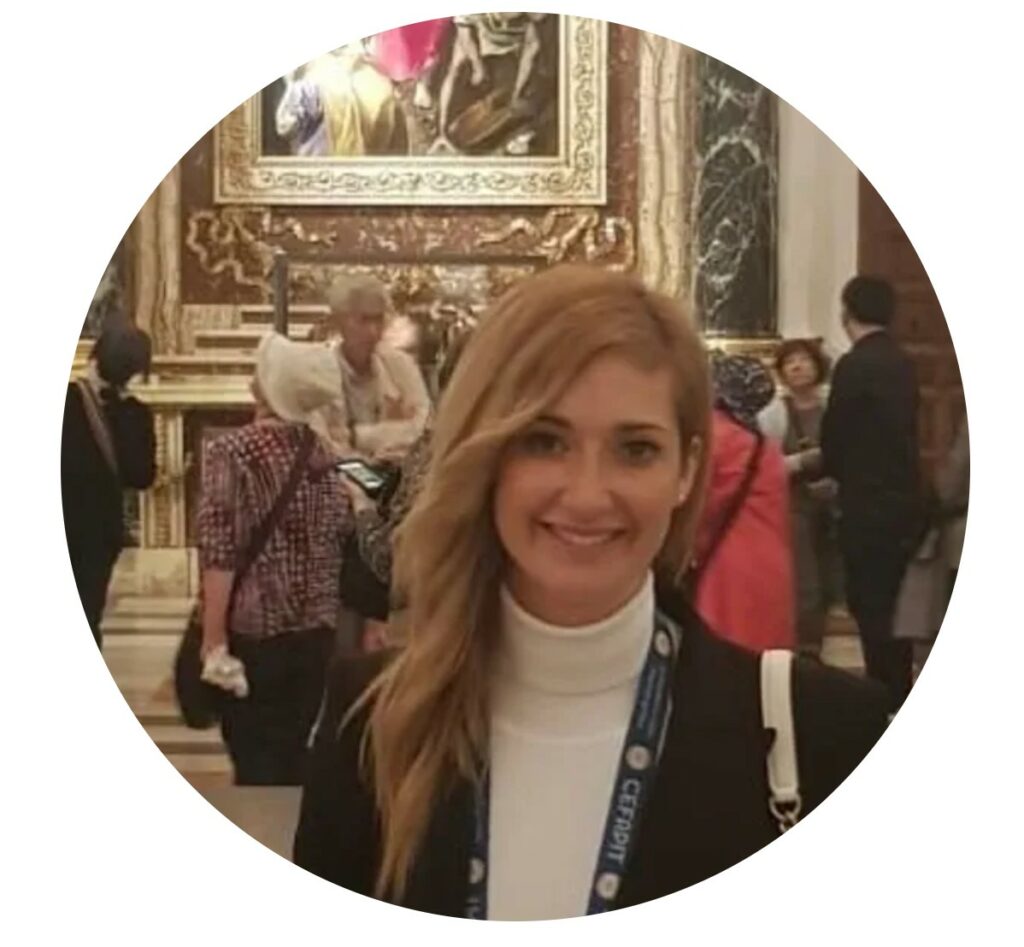 Born in Toledo, Sara Rodríguez grew up in a family dedicated to tourism, owners of a restaurant and a hotel in the historic centre, where she fell in love with her beautiful hometown. After getting a Teaching degree, she decided to study Tourism and become certified as a guide to be able to show the wonders of her city to visitors. Although her greatest passion is travelling around the world, she is always happy to get back to her beloved city.

We are not only a guided tour company, but we are also official guides those of us who make up the company, so we give ourselves to the maximum in each visit, whether it is for a couple, a group of friends, a school or an association of older, and we have official guides in 7 languages (Spanish, English, French, Italian, Portuguese, German and Japanese ).