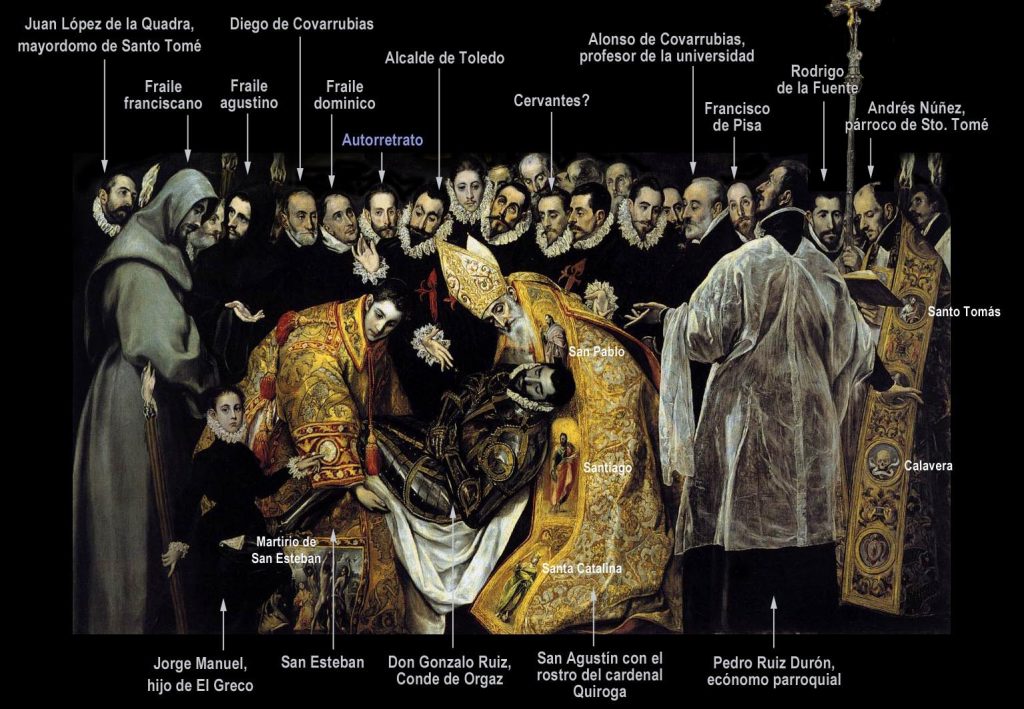 1. The Burial of the Lord of  Orgaz  has never left the  Santo Tomé Church

From the moment when El Greco delivered his painting to the parish priest, Don Andrés Núñez, in the 16th century, it has never been taken outside of the Santo Tomé Church.  The only move was from one wall to another.  And it has only been cleaned once in all this time.

2. The faces of the Virgin Mary and the Christ Child

Every time the painter had to capture these faces in his work, he used his wife, Jerónima de Las Cuevas, and his son, Jorge Manuel, as models.  Jorge Manuel also appears in the Burial of the Lord of Orgaz, next to Saint Stephen, pointing at the subject of the painting.  We can also point out that if you observe the handkerchief that is sticking out of his pocket, you can see the year of his birth printed on it. (1578)

3. A live person among the dead

If we look at the top of the painting (Heaven), we can se a portrait of Philip II, a personage who had not yet died when the picture was painted.  With this gesture, El Greco wanted to show his lack of resentment towards the king, who had scorned him.

The miter that Saint Augusting is wearing in this famous painting actually belonged to Cardenal Gaspar de Quiroga y Vela in the 16th century.  At present it can be seen in the Tapestry Museum of the Cathedral of Toledo.  But El Greco did not only take Cardenal Quiroga’s miter, he also used his facial features to depict the Saint.

5. The most expensive painting of its time

El Greco received 1,200 ducats for his work, The Burial of the Lord of Orgaz, in 1590.  It was the highest price ever paid for a painting in Spain until that time.

This high price caused several disagreements with the parish priest of the Santo Tomé Church, don Andrés Núñez de Madrid, who considered the amount excessive compared to what the artist had been paid for other works (318 ducats for The Despoiling and 800 for Saint Maurice).

6. A painting within a painting

Finally, we share the following image of protective work against bombardments during the Spanish Civil War.

Do you want to know more about El Greco and his life and work?  Discover it with Destino Toledo and our tours. Visit www.destinotoledo.net

PrevPrevious7 things you mustn’t miss if you visit Toledo 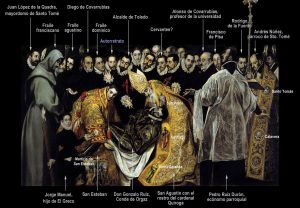